You are at: Blog » Industry Watch » SOPA and PIPA – A savior of the US copyright owners or a destroyer of the free and open internet?

SOPA and PIPA – A savior of the US copyright owners or a destroyer of the free and open internet? 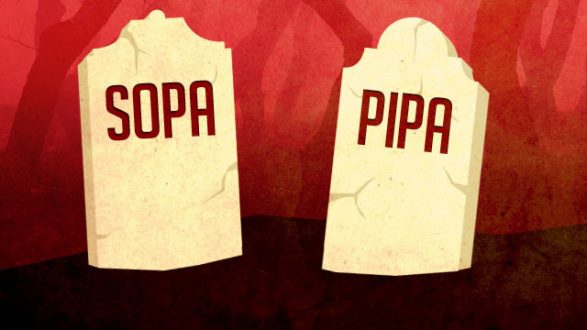 The Stop Online Piracy Act (SOPA) and the Protect Intellectual Property Act (PIPA) – the U.S. House bills introduced in the US Congress have earned massive diversified speculations from business conglomerates, internet giants, hollywood studios, productionn houses, creative agencies and individual bloggers and websites alike. While the legislation has broad support from organizations that rely on copyright (including the Motion Picture Association of America, the Recording Industry Association of America, Viacom, Macmillan US), it has strong opposition from industry giants like Google, Yahoo!, YouTube, Facebook, Twitter, AOL, LinkedIn, eBay, Mozzila Corporation, Roblox, Reddit, Wikipedia and some legislators as well as a partial opposition from The White House itself.

What is SOPA and PIPA and the censorship of the internet

While most of these rules don’t apply to domains that end in .com, .net and .org since they fall under US law, the language is so broad that even the protected US sites are vulnerable as overzealous copyright owners can easily abuse SOPA and PIPA. Paypal and Google will ultimately lose millions of their revenues coming from such foreign user-generated content based websites who are not directly participating into copyright infringement but just because some user uploaded some illegal content, the site got thrashed. For heavy user-generated content websites, it is practically not possible to scan user data everyday to find such infringing material and content.

The bills are mainly targeting foreign websites that appear to be directly indulging or promoting pirated US content but the language is so vague that any US resident using existing US sites such as Google, Facebook, Wikipedia, Reddit etc. can file a complaint against it as well. While the bills sound like they have a positive aim to protect original US content, in reality, like they say, the devil lies in the details. The bills have serious potential to negatively change the internet as we know it today. Both SOPA and PIPA put power in the hands of the entertainment industry to censor sites that allegedly ‘engage in, enable or facilitate’ copyright infringement. This sentence is sufficient enough to shut down sites that you have been regularly using such as Flickr.com overnight.

Willingly or unwillingly, practical or not, if SOPA and PIPA come into effect, it will forcibly push user-generated content websites to daily monitor theri member profiles and the material and content that they upload to find out illegal material. Also, how will they know if an uploaded material is not their copyright ownership until the original owner claims to take down the uploaded material? Not just that, it will raise serious issues of user privacy and the ‘free’ and ‘open’ internet will no longer be the same.

This will also invite serious security issues as well as more and more data will be open and vulnerable and thus inviting more hacker attacks on such websites.

SOPA sections 103 and 104 are mainly modeled after the heavily criticized notice-and-takedown provisions of the current Digital Millenium Copyright Act (DMCA) that requires services like YouTube to pull down infringing content after the copyright owner complains. This system has been abused on occasion, however, it allows YouTube to avoid direct responsibility for the actions of its users – it would habe been otherwise suied out of existence by now. The bills while somehow tries to protect US domains and businesses this way, the language is unfair for the foreign hosted websites. Any US copyright or IP owner can simply complain against a foreign website and the entire site gets shut down (if its server is hosted in the US), domain blocked (if the DNS is under US law), payments stopped (if the website is routing their payments via a US based payment processor or payment gateway) and marketing stopped (Search engines will be ordered to blacklist the website and Google Adsense and other ad networks will be ordered to stop the ad inventories).

Here’s how this can be abused by overzealous US businesses. Someone from within the US can open up an account with a rival foreign website, upload/post copyright infringing content and notify the owner of that copyrighted material in the US who eventually complains against that website and the website loses all US business overnight! This is sufficient enough for the website to go bankrupt since they will loose their US traffic, payments, marketing, DNS (if hosted in the US) etc.

Attempt to create a monopolistic environment for the US production houses?

The above cited example is an indirect promotion for the creation of a monopolistic environment for the US production houses and corporates with copyright and IP material ownership. No wonder if the European Union and other foreign bodies come out against these proposed laws sooner rather than later. Not just that, SOPA section 104 offers legal immunity to ISPs that independently block websites that host illegally copied mateiral without any prompting from the government. This is a major conflict of interest for a huge ISP like Comcast, which also owns NBC. Comcast can then easily block a foreign video service that competes with NBC if it could just claim it had a ‘reasonable belief’ it was ‘dedicated to the theft of US property.’ Comcast is, indeed, among the companies that support SOPA. It makes sense.

SOPA will weaken the ‘safe harbor’ protections provided by DMCA

The 1998 Digital Millennium Copyright Act (DMCA) includes the Online Copyright Infringement Liability Limitation Act, that provides a ‘safe harbor’ for websites that host content. Under that provision, copyright owners who felt that a site was hosting infringing content are required to request the site to remove the infringing material within a certain amount of time. SOPA would bypass this ‘safe harbor’ provision by placing the responsibility for detecting and policing infringement onto the site itself, and allowing judges to block access to websites ‘dedicated to theft of US property. The bill is vague enough that a single complaint about a site could be enough to block it, with the burden of proof resting on the site.

Since US copyright holders generally can’t drag a foreign website into US courts to get htem to stop stealing and distributing their work, SOPA allows them to go after the ISPs, ad networks, search engines and payment processors that are in the United States, to stop working with sites that are blacklisted by them. While the idea behind the law sounds genuine, it has overlooked the practicality of how the internet works. The movie studios can’t punish the real pirates, so they are attacking the entire network instead, thus dragging a lot of other innocent and genuine users of those websites as well. Imagine YouTube getting sued for an alleged complaint by a copyright owner over some user using his/her material and publishing it on YouTube without the owner’s permission.

SOPA and PIPA – A threat fo new start-ups and slow down in venture capital investment and ultimately a slow down in the US economy itself!

SOPA and PIPA is designed such that even a single complaint (just a complaint/notice without any government or court approval) is sufficient enough to put any foreign website out of business until they reply to the notice within five days promising to appear in a US court. So, even if they appear in a US court, a couple more of such notices and they are easily bankrupt. Who would want to risk into getting such lawsuits?

The Electronic Frontier Foundation have stated that the requirement that any site must self-police user generated content would impose significant liability costs and explains why venture capitalists will choose to stay away from such start-ups. It is interesting to know that the majority of the recent dotcom successes are having user-generated content, such as YouTube, Facebook, Twitter, LinkedIn, Wikipedia, Reddit, Flickr etc.

The language of SOPA is so broad and unconnected to the reality of the internet technology and how it works that it could effectively kill e-commerce or even the normal internet use.

Booz & Company on November 16 published a Google-funded study finding that almost all the interviewed venture capitalists and angel investors would stop funding digital media intermediaries if the bill became law. More than 80 percent said they would rather invest in a risky, weak economy with the current laws than a strong ecomony like the US with the proposed law in effect.

From Ideation to Reality

Get connected with our business experts to discuss how to develop, market and scale up your startup or online business.